"You are the teacher you've been waiting for." 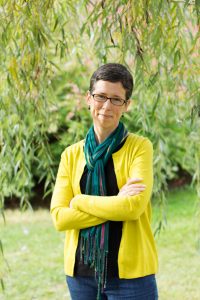 My journey to becoming a UC Davis-certified life coach began almost a decade ago when I had my first panic attack. Up to that point in my life, I had been a chronic worrier and suffered from a variety of stress-related illnesses, but anxiety was still completely unknown to me. A week later, it finally introduced itself.

After my second panic attack subsided, I felt like I had a stack of bricks on my chest and a hand clasped around my throat. I tried everything I could think of, from deep breathing to massage therapy, but nothing made those uncomfortable sensations go away. They were my constant companions every waking hour of my daily life for a year and a half.

As a result, I also developed depression and on a dark, desperate night while driving home from work, I finally realized I needed to seek help. In that moment, I began a journey that would lead me into the deepest parts of my heart and mind.

I found a compassionate therapist who recommended the book When Things Fall Apart, by Pema Chödrön, which served as my introduction to the philosophies of Buddhism. For the first time in my life, I was able to see my suffering from a new, less overwhelming perspective.

While searching the self-help section of my local library a few weeks later, I stumbled across the book Loving What Is, by Byron Katie. Her process of inquiry, called The Work, helped me use my fears to unlock the wisdom hiding inside me.

Many more books followed, which introduced me to additional philosophies, practices and processes. Awareness came slowly at first, and then with greater frequency. I faced fear after fear after fear for a number of years, until the grip of anxiety finally began to loosen.

When I finally found the courage to start making much needed changes in my life, I experienced something unexpected.

My circumstances had in some ways become even more challenging, but I no longer felt as overwhelmed by them. I began to engage with the world around me and became curious about what I discovered. I felt anxious less and excited more. My perspective shifted with less effort. In addition, I began to notice how alive I felt when I spoke candidly about the new lessons I was continually learning. It was time to accept and embrace my calling.

I chose to become a life coach, because woven into the fabric of the discipline is the belief that the client is never broken, and therefore doesn't need to be fixed. This radical new perspective helped me to realize that even in my darkest days when I felt damaged beyond repair, this too was only a perspective.

In reality, I was whole and perfect, but I just couldn't see it yet.

I now serve as a compassionate, collaborative partner for those who embark on their own journey of self-realization. My mission in life is to empower selfless perfectionists to change the world by changing their perspective first. My vision for the world is a place where everyone has the clarity and self-worth to find authentic fulfillment, even in the midst of life's most daunting challenges.

I grew up in Mishawaka, Indiana, and moved out west after receiving my Bachelor of Science in Meteorology and Master of Science in Education from Purdue University. After more than a decade living in New Mexico, Wyoming, and various parts of California, I came full circle and now make my home in South Bend, Indiana.

My previous careers include diverse experiences in K-12 education, higher education, the National Park Service, and nonprofit program management. In my free time, I enjoy being out in nature, having deep, meaningful conversations with friends, and capturing the ever present beauty of the world around me through photography (all the nature images on this website are from my own portfolio).

There are no upcoming events at this time.